This entrepreneur wants to remove the hangover from all of Mexico


In the entrepreneurial world there is everything from cup holders for mega beers, tech companies that turn into unicorns, organizations with a social focus, food, to drinks that help you overcome a hangover or hangover.

“We started almost broke” was one of the phrases Andrés Ojeda, a young entrepreneur who has “doing business in his veins” shared with me, since his maternal grandfather was the founder of several companies.

Andrés brought to Mexico, from India, a drink made of curcumin, “an extract of turmeric”, potassium and electrolytes, called Survivor Shot . It helps to avoid the effects caused by alcohol consumption.

“When a person consumes alcohol, the liver processes it and converts it into a substance called acetaldehyde, this is the chemical that actually causes the hangover… [The product] speeds up the metabolism to eliminate acetaldehyde 30% faster than your body… It helps you eliminate this substance and rehydrates you… It helps detoxify the liver ”, explains Andrés Ojeda in an interview for Entrepreneur en Español.

“If it works for you, it does work”

“He taught me and said, ‘you know what, there are many things to see here in India, focus and search.’ I started with a software company that is an application for schools, and from there I brought it to Mexico ”, says Andrés.

This business and his wife made the young entrepreneur maintain a very active life between Mexico and India, so one day, on one of his trips, Andrés went into a pharmacy in India and read the label of a product that said “ avoid the hangover ”, next act, he bought the drink with the aim of trying it.

“My girlfriend told me: ‘oh yes, I haven’t tried it but it’s famous’, so I tried it and I liked it a lot… Then I bought another one and said ‘wow I woke up without a hangover’ and I find the raw ones horrible, in fact my My friend, the ambassador told me: ‘if it works for you, it does work,’ “he says.

After having tried it, the young entrepreneur took on the task of talking with the owners of the brand, who to his surprise turned out to be acquaintances.

“They invite me to the office of a family business where they make herbal extracts and it turns out that my father sees me and says: ‘I know you’ and I didn’t know where from… Then I realized that we were going to same sports club because the family I lived with were their friends. There a very good relationship was built, and they told me ‘Andrés, whatever you want, we are here to help you,’ ”he says.

Did we start almost broke?

One of the first challenges Andrés faced when importing a product was the issue of labeling.

“When the product arrives they made a mistake, there was a finger error and instead of putting 60 mg 5% on the label, they put 60 mg 0% … For that mistake they sent me to re-label everything, and I did not know that in the ports you could re-label in your winery as you wanted and without problems… It took four months and each label came out at four pesos per bottle ”, he explains.

However, those four pesos per bottle were not the problem.

“The product comes out already re-labeled and everything, after a month of obstacles and others, and I get an invoice for almost 200 thousand pesos … I told them: ‘hey, take my product,’ and that’s when they explained to me that the tax registration they charge you for labeling within their warehouse, that is, it doesn’t matter that your labels are charged to keep them there… I didn’t know that, so I had to pay out a lot of money and we almost almost started the company bankrupt, the first order all bankrupt ” added.

Survivor Shot hit the Mexican market in 2019, and in its first four months of life it generated sales of over 100,000 pesos per month, more than approximately 10,000 bottles. However, when the pandemic hit, they went from that amount to zero.

Currently, they are recovering the market and their distributors, in this way they have already managed to position themselves between sales of 30 to 60 thousand pesos per month.

“They throw you at sharks, literal” 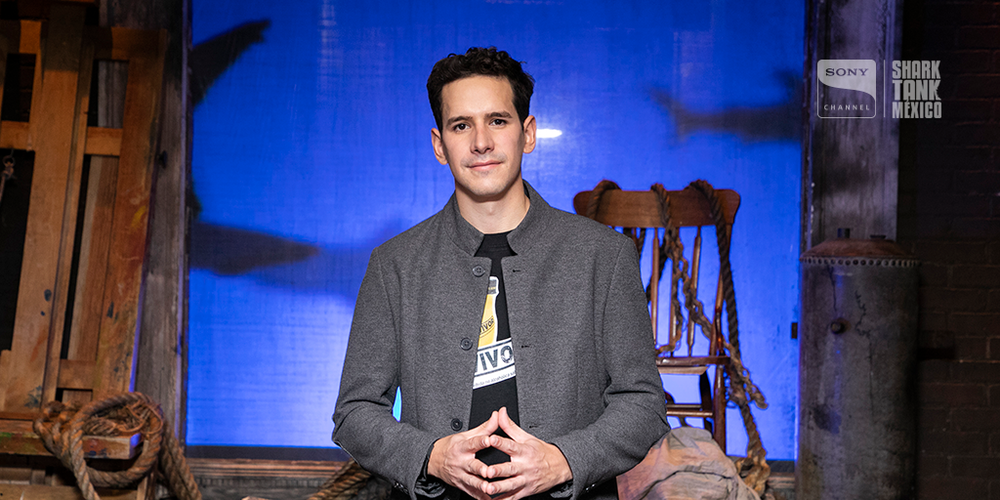 Andrés Ojeda arrived at Shark Tank México , which airs every Friday at 9:30 p.m. on Canal Sony , seeking an investment of three million Mexican pesos for 15% of the brand.

Although some sharks disagreed with the product, arguing that they “would never endorse something that says nothing happens if you consume alcohol,” the tank was filled with bites when three other sharks made the young entrepreneur an offer.

“Arturo made me the first offer, then Rodrigo and then Marcus … I was analyzing what to do, but you don’t have time to think and as I was in shock, at first you have to process an offer and then you receive more, I felt that in 30 seconds I had to process how each person could help me… They throw you at the sharks, literally, ”said Andrés.

Finally, the young man accepted a joint offer from Rodrigo Herrera and Arturo Elías Ayub , who offered him the amount he requested, but for a royalty of 30 pesos on each bottle sold for three years and if in that time those royalties return their money to both businessmen They will decide whether to reinvest what they earned and keep 30% of the brand or get out.

Importing a product is not an easy task, and several errors such as the one on the label confirmed that fact for Andrés, however, he never gave up and today he gives us three tips for those who plan to bring a product to Mexico.

1. Research everything you can, especially the barriers to entry into the country, this includes all the requirements.

“Do not score a goal like me, make a check list and go marking it every time you get a requirement … Get advice and import a sample beforehand with the real label so that you are prepared and have time to think about what your next move will be. ”.

2. Analyze your market and the points of sale for your possible product.

“If it is a very large investment, but if you can, try to place the product before it reaches you. For example: I had already sold 25% of the container, before the product arrived in the first order ”.

3. The most important thing is customer service.

“In all businesses, the most important thing is customer service, be it from your point of sale or end consumer, give them due follow-up and the best service available to you.”

5 Challenges Confronting Every Business and Their Personal Brand