Chamaica, the chamoy that conquered the palate of the sharks of Shark Tank México


How many healthy dressings do you know, how do you accompany your healthy snacks? Marcela Bravo, a food engineer, is a person who has always taken care of her health through food.

“I love chili peppers and I told [my nutritionist] that I wanted to eat some chamoy with the jicama and make it a little richer, but I just couldn’t find it,” says Marcela Bravo, founder of Chamaica, in an exclusive interview.

Finally, a food engineer , in one of her college classes she was asked to develop a product with organic waste, and Marcela had the idea that she could make a chamoy from the hibiscus flower. However, although he developed a recipe, he did not present that idea as his final project, but continued to work on it outside of academia.

“I didn’t want to put it in class and I started doing it for my acquaintances, in toppers, I started selling them like that to friends and then to their aunts, then one day someone convinced me to apply to the San Pedro de Pinta market , which is in Monterrey ”, explains the entrepreneur.

In this way Chamaica was born, a chamoy made 100% from the hibiscus flower, different from other sauces of the same type that are made with tamarind or fruits. Marcela’s dressing also does not contain acidulants, thickeners, or fillers.

“The tamarind base, processed always comes with sugar, or for example, guava, plum, all these bases that are used also come with sugar. It is not the same that you eat a fresh plum to a plum that is a concentrate, it has a lot of sugar, so even if they are natural, there are options, they are usually very high in sugar, the hibiscus is the opposite, when you hydrate it increases its weight without increasing its sugar content. This allows us to have a base that is full of antioxidants, fiber, and has a very low caloric load, apart from being naturally acidic, we do not need to add any acidulant, plus that is what normally irritates your skin. belly ”, says Marcela.

To achieve the characteristic thick appearance of chamoys, the entrepreneur uses chia.

For those who read us from any other Spanish-speaking country, chamoy is a Mexican sauce or dressing that is traditionally prepared with dried fruit, chili, salt, and sugar. Its flavor is between sweet, spicy and acid.

According to the Larousse Cocina dictionary, this sauce had its origin in Japan, but it became established in the taste of Mexicans. It accompanies snacks such as jicamas, chopped mango, among other fruits and gives rise to drinks such as chamoyada.

The pandemic as an impulse

This entrepreneur originally from Durango, started her business in Monterrey and after graduating she decided to have a part-time job with the aim of not abandoning her project. However, the pandemic forced her to return home, and it was at that moment that she decided to dedicate herself fully to her product.

Marcela Bravo started with an investment of no more than her time and the first supplies for the sauce. Later it acquired an industrial blender and other necessary instruments to improve its production. Everything from your department.

Chamaica is currently sold in specialty boutique stores, in the offices of some nutritionists, and online through Amazon. Likewise, it already has a warehouse and more collaborators. “Last year [2020] we closed sales at 800 thousand pesos and this year the goal is to increase 20% to reach one million,” says the entrepreneur. 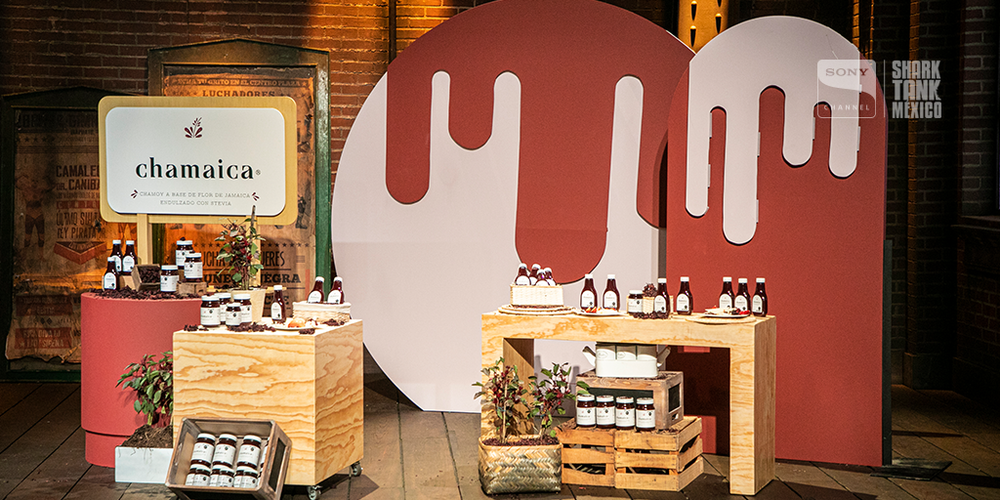 Chamaica arrived at Shark Tank México , which is broadcast on Canal Sony , asking for half a million pesos in exchange for a 15% stake in the company and managed to catch three sharks: Marisa Lazo , Ana Victoria García , and Rodrigo Herrera .

The investors offered Marcela the 500 thousand pesos but for 10% for each one, and the entrepreneur accepted the deal.

What follows for this project is to consolidate online sales and continue growing, a characteristic for which alliances have been key. In this sense, Marcela Bravo gives us three tips for women entrepreneurs.

“One of the most important things that differentiates us from working with men, and I think something that makes us very strong is that we are more connected to understanding people and seeking help … Being understanding. And many times I feel that we believe that this can make us weaker when it is not like that ”.

“Finding the balance is much more challenging being women. Having your times well defined and asking for help when necessary is good advice ”.

“At the stage where we are in Mexico, it is still very necessary that we support each other and encourage each other instead of putting our foot down … We are stronger if we help each other to have a better chance.”